Create a test lab to demonstrate IPv6 connectivity with a simulated multi-subnet intranet and IPv4 Internet.

Internet Protocol version 6 (IPv6) is designed to solve many of the problems of the current version of IP (known as IPv4) such as address depletion, autoconfiguration, extensibility, and restoration of end-to-end connectivity. Its use will also expand the capabilities of the Internet and enable a variety of valuable and exciting scenarios, including peer-to-peer and mobile applications. This paper contains an introduction to IPv6 and step-by-step instructions for extending the Base Configuration test lab to demonstrate IPv6 functionality and connectivity in Windows 7 and Windows Server 2008 R2.

In this test lab, IPv6 connectivity is deployed with:

The IPv6 test lab consists of three subnets that simulate the following:

Computers on each subnet connect using a hub or switch. 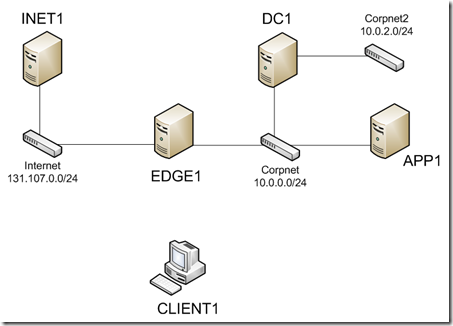 The following are required components of the test lab: