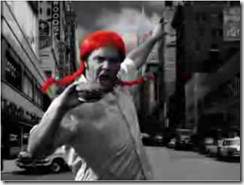 My personal laptops I use for training and presentations are really top-notch. But I’ve been riding a worn-out hand-me-down whitebox rig for my day-to-day desktop PC, and it’s pretty much been circling the drain. Fan gave out on the video card, hard drive is tripping S.M.A.R.T. alarms for temperature, slow CPU, skimpy RAM, Outlook is horked, it’s basically a digital dog with parvo.

I heard through the grapevine that they’re going to upgrade me, but I’ve heard that before. New hires keep coming on and snagging the new PCS, so I just deal with it like everyone else. It’s like paint all over a painter’s truck – no big deal. It’s just a PC, not a status symbol.

So Thursday I get a call from a good pal at corporate (Shawn “The Baconator” Bacon) who’s ordering a new machine for me, and I’m all, “Yeah sure, when does another new guy start?” 😉 Little did I know that dude was giving me the total hookup. He said it would be nice, but man, I had no idea!   And today UPS shows up and drops a stunning new HP rig at my door.  It’s been a long time since I had kid-in-the-candy-store-itis over a desktop PC, but today was one of those days.

True, I could blog about system specs and benchmarks, but that’s not really the point (and that stuff fades with the next new model anyway). The point is people, and the intent behind the hardware pales the PC by comparison. Shawn is a super nice guy who works hard and doesn’t get nearly enough recognition for his efforts. And he knows that we techs bend over backwards for our customers. Today he went above and beyond to provide the horsepower and tools for me to help keep customers happy, plus the extra ‘oomph’ for my particular presentation and virtualization needs. Nice.

It’s very gratifying to know that in a industry dominated by billable time, tech utilization reports, and constant banging of the managed services drum, there are still cool folks who care. Therefore, as sole editor of this blog and stuff,
I declare Tue July 8, 2008 “National Baconator Day”.

Shawn, you totally rock dude. Even more than the real Baconator. Thanks!!

P.S. As an extra bonus, the packing material had some wicked-awesome printing that was a riot.  I just wish I could get the ‘baby’ one as a T-shirt! 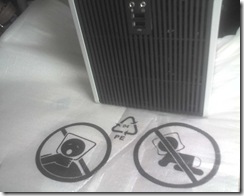 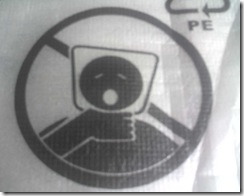 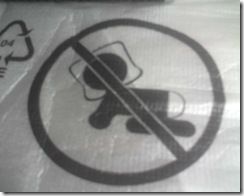