It was a dark and stormy night… literally!

Last night I woke up to a bright light in my face. At first I thought the cat had bumped the touch lamp or something. After a few seconds of trying to get my bearings, I realized that it was a white flashing light, and it was coming from outside. It had been raining for hours, and I’m a pretty sound sleeper, so it takes a WHOLE LOTTA storm to wake up my lazy butt. Especially this early / late.

Listening to the commotion outside, the storm sounded like an ’11’ on the “Holy-Crap-O-Meter”. I went to the window and looked outside and was shocked to not be greeted by an Ark and animals lining up two by two. George Clooney would have been proud of this storm.

Rather than play Marco-Polo at 2AM with the cablebox remote (hoping that the cable TV wasn’t out) I grabbed my trusty Windows Mobile device: 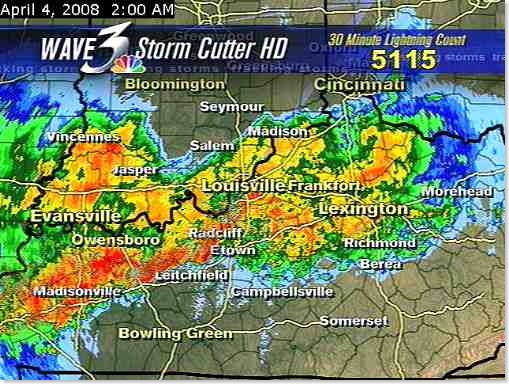 After that, more lightning ensued.

Now that the storm has passed, my inner-geek calls out for me to do the math:

At the time, I didn’t really have math on my mind – I just wanted to know if we’re in the middle of the tempest, or if it was almost over? How long can my dog tread water? Would a house land on a witch? But in hind sight, being prepared is a good thing. Having a device that can provide this kind of information wherever you may be (movie theater / basement / stuck in traffic) is invaluable. Thanks Windows Mobile Team!