I’ve been working lately to try and streamline the tools and methods I use, and I’ve even been fine-tuning the transport of that equipment.

One thing I’ve adopted lately (that I can’t live without) are various sizes of hard plastic water-proof / crush-proof cases made by Pelican Products. Here is one of my favorites:

There are a plethora of Pelican Micro Cases, and the odd sizes can make it a bit overwhelming (or trial-and-error) to find the right size case. The 1020 Micro Case is the perfect size for 2.5” portable hard drives. It has a rubberized insert in the bottom and a clear lid so you can see what’s inside. 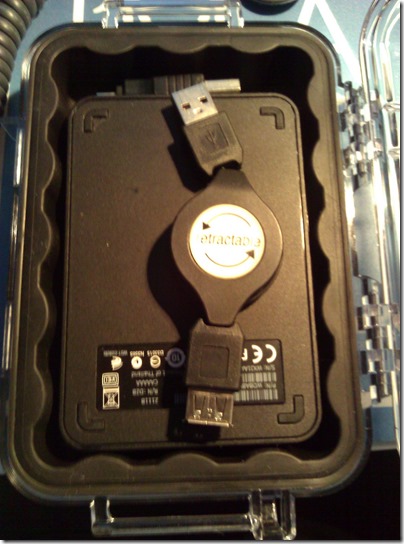 The drive shown in this picture is a Western Digital 1TB 2.5” USB 2 drive.

Something to note – the Pelican Micro Cases are a bit tall, so they won’t fit that easily in a hard-sided bag. However, if you carry your laptop around in a backpack, this is the perfect way to add some protection.

I’ll highlight some other favorite tech things on the blog, and you’re welcome to share your ideas and tools too!

Are your network switches energy efficient? I thought mine were.

A couple of years ago when upgrading my network at home I installed some new 8-port D-Link Green gigabit switches. At the time I was mostly concerned with ‘jumbo packets’ and streaming media, the warranty, and the green stuff was just a nice bonus.

Recently though as I’ve been adding / changing network equipment, I’ve been going through the home network, benchmarking how much power is being used to try and minimize electrical waste. It’s kind of fun in a sad nerdy way.

Today I’m adding another 8-port gigabit switch to my LAN to be used as an iSCSI backbone. I thought about buying another D-Link green switch, but decided to take the scientific approach. Considering that my existing 2-year-old switches were ‘green’ already, this project yielded another big surprise.

These switches performed well for me and handled the job of streaming HD content and moving VHD and ISO files across the LAN with no problems. When I bought these switches 2 years ago, the box stated a power savings of up to 80%, which sounded greener to me.

In the past, I wasn’t a big fan of TRENDnet. Their blue plastic hardware looked like something made by Fisher Price in the 70’s, but not anymore. These new switches have a sturdy metal housing, and I like them.

These two switches are very ‘apples-to-apples’ in network specs.

I intentionally benchmarked both switches at 75% capacity (6 ports used with 2 ports unused). The reason being, I don’t like to use all the ports in a switch. In case a port goes bad you still have a couple of extra ports left and don’t have to replace the whole maxed-out switch.

On to the test results…

Both are good switches. I’m only saving about $1.61 in electricity per year on the new switch, so obviously I’m not going to replace the existing D-Links with TRENDnet. But it’s nice to see how much greener things have gotten in just the last 2 years! A 42% greener product over something that is already green is awesome!

Fantastic 4-port travel-sized surge protector. Great for sharing power in airports, charging your stuff in hotel rooms, or plugging in for presentations.

This adapter is as light as a travel umbrella and takes up about the same amount of space. It’s so light, I usually forget that it’s in my bag.

If you travel a lot domestically, you know what a pain it is to find a place to plug in and charge all of your gadgets. Unless you’re at a super-power-friendly airport (like PHX) you’re probably unlikely to find multiple open outlets. This has great outlet spacing, it’s very sturdy, and doesn’t get hot when all of the outlets are in use.

Note: If you need a travel 4-port that works internationally with 220/240 volts, check out the Outlets To Go power strip from Monster:
http://www.monstercable.com/productdisplay.asp?pin=3842
I picked the Targus over the Monster because I don’t need 220 and it’s smaller than the Monster.

The IOGEAR USB 2.0 External DVI Video Card instantly adds an additional high resolution DVI display through your USB 2.0 port. Install the driver, plug the adapter into the USB 2.0 port, plug in your monitor, and you’re ready to go. This is a killer way to add a third (or fourth) monitor to your laptop or desktop PC.

I’m a multi-monitor kind of guy (at least dual-monitors, but sometimes as many as six). You can never have too many monitors, especially when you’re doing research or remote support. Even with a docking station, you’re likely to max out a notebook PC at 2 monitors. These things are awesome! When I want to watch full-screen HD video, I just make sure to park that video player on a monitor that’s physically attached to the ‘high performance’ video card, and not on an a ‘USB’ monitor.