One of my 80’s favorites was the movie WarGames.

(Hint: You should really watch it on Netflix – it’s a classic.
Here’s the WarGames movie trailer for you kids.)

Anyway, for those of you who DO remember War Games, that speech synthesizer was pretty creepy back in the day.
But it was equally cool because speech was pretty rare in those days unless you had a Texas Instruments TI-99/4A (which I did – woot!)

It’s hard to believe that movie came out 30 years ago, and technology has changed a lot. Windows has had speech built in for quite some time, but did you know you can access the speech API with PowerShell?

Who cares, right? WRONG! It’s pretty fun! And it’s a good bit of code to use to prank your IT co-workers. (Think login script or batch file that runs as a scheduled task…)

Here is a video demo of Windows Server 2012 reading classic computer lines from the movie WarGames:

Not too shabby for a Windows Server, eh?

So, shall we play a game?

Below is the PowerShell code for you to play with and tweak.
Have fun annoying people! 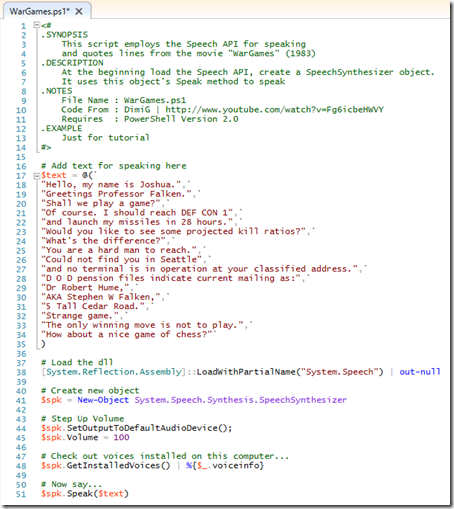 Props: DimiG for the PoSh code