Description:
The topic this month is “Digital Home”, demoing integration between Xbox 360, Windows 7, Windows Home Server, Windows Phone 7 & iPad. We’ll discuss the video and audio formats & apps used, network configurations, and show how to access your digital media inside or outside the home or office.

Sneak peek at the presentation: 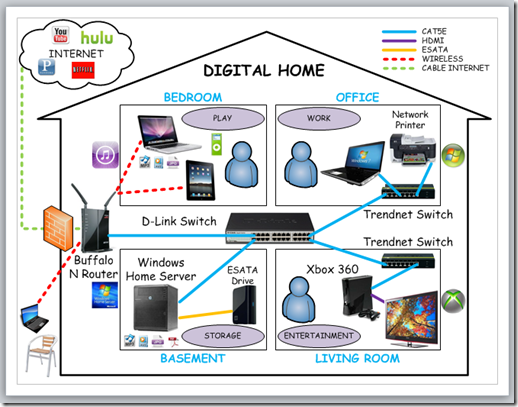 We’ll go through this virtual Digital Home and explain it one room at a time, explain which equipment is needed, best practices for setting it up, and leave plenty of time for Q&A.

A little over a year ago, my beloved little Xbox 360 Elite decided to take a dirt nap. No more Netflix, no more games, no more MP3 / AVI / DVD-MS / Media Center on my big TV. Just three flashing lights, taunting my soul.
It was the fabled ‘Red Ring of Death’.

Note: This is not intended to be a rant, and I’m not trying to get Microsoft to change their policy on anything. I care about you, dear reader, and about the fine folks who work at Microsoft. And because I care, I’m trying to get the Xbox repair facts out there. Facts that may not be readily (or even remotely) clear or available on their website.

No, the towel trick, q-tip trick and penny trick and didn’t work for me.