The SharePoint Migration Assessment Tool (SMAT) is a simple command line executable that will scan the contents of your SharePoint farm to help identify the impact of migrating your server to SharePoint Online with Office 365.

Because the tool is designed to run with out impacting your environment, you may observe the tool requires one to two days to complete a scan of your environment. During this time, the tool will report process in the console window. After the scan is complete, you can find output files in the tools directory that will give you summary and more detailed insights into the scenarios that could be impacted by migration.

With the developer preview of the SharePoint Framework available, take a deeper look at how you can deliver new experiences for SharePoint using common Web development tools. You’ll see the new SharePoint Framework and the new Client Side Web Parts that provide the ability to extend SharePoint in ways that were previously unavailable in the Cloud.

Adam Harmetz gives a rundown of SharePoint’s updated team collaboration experience across SharePoint and OneDrive and what’s coming in the future. He shows what the mobile and web experience is like working with and sharing team files. Se the recently launched improvements to the SharePoint team site which allows for the quick creation of a home for your Office 365 Group’s content. See the cross-platform mobile apps that help you connect with your team members and content while on the go.

I’ve been an infographic mood lately, especially as it relates to SharePoint.

Below is a great infographic, created by Matt Wade, that quickly identifies performance limits and hard limits for SharePoint 2013 and Office 365. In addition to being a handy reference chart, Matt’s blog post also discusses the logic behind the numbers.

(When the SharePoint 2016 version comes out I’ll add a link to that version.) 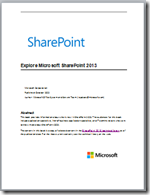 Also, if that first link in the PDF doesn’t work, here’s the URL to access the SharePoint 2013 Technical Library on TechNet:
http://technet.microsoft.com/en-us/library/cc303422(office.15).aspx

Prop: Thanks to Robert Crane for the heads-up

Props: Thanks go to Fred Soward for the heads-up about this event!