“4 out of 5 dentists recommend Trident for their patients who chew gum.”

I joke and wonder, “Is that 80% of those surveyed or did they only ask 5 dentists?”

Still, we’ve learned over the years to take statistics with a grain of salt.

Where I stop shrugging these number off is when I see a statistic that flies in the face of personal experience. It’s like seeing a ‘57 Chevy with only 200 miles on the odometer. You know there’s either an incredible and fascinating story there, or a load of bull.

With that in mind, here is the statistic that caught my attention:

“58% of SMBs say that London cloud computing will make their companies more competitive.” 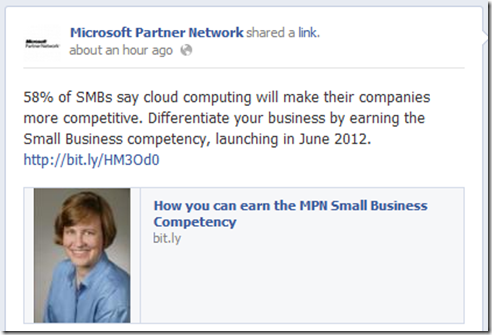 Now, “58%” may not be that fascinating to you, but it nearly broke my ‘awesome story vs. bull detector’ meter. The reason being, if you see wording like the Facebook post above, your brain sees those numbers like this: 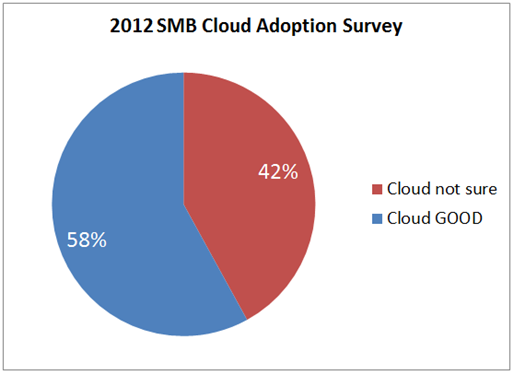 And that’s part of the problem – marketing hype like that skews perception. The SMB customer / partner / employee thinks, “Am I in the majority or the minority? Is there something I’m not doing?”

Here’s the other part of the problem – that study doesn’t represent the opinions of 100% of SMBs. It’s not even 10% of SMBs saying that! In fact, it’s just the voices of a teeny tiny itty bitty sliver of SMB folks the surveyors happened to talk to.

The time has come to cut through the Cloud Hype!

Since the Microsoft Partner Network Facebook post “58% of SMBs say cloud computing will make their companies more competitive” was the straw that broke the cloud camel’s back, here are the issues I raise:

You’re as much a marketing company as a software company, Microsoft. You know better than this.

What we do know is that they talked to at least 50 people. But I’m sure it was much more than that though, right? How much more?

Issue #3 – How Big Was that Survey Sample?

I ask this question because most SMBs I talk to are constantly hearing that cloud is what they should be doing. Most of them are completely inundated with the cloud message like the blinding lights of paparazzi at a movie premier. They’re starting to either become desensitized to it, frustrated by the repetition, or they start to panic. (See sub-rant at the end).

“The research conducted by Edge Strategies includes survey responses from IT decision-makers or influencers at more than 3,000 SMBs in 13 countries.”

For the sake of fairness and time, I’ll not even touch the definition of “IT decision-makers or influencers”. (You’re welcome).

The Microsoft SMB Business in the Cloud 2012 research report was designed and conducted in conjunction with Edge Strategies Inc. in December 2011. The research questioned 3,000 SMBs that employ 2 to 250 employees across 13 countries worldwide: Australia, Brazil, China, Denmark, France, Germany, Japan, Russia, South Korea, Spain, Turkey, the U.K. and the U.S.

They even included a little infographic with several sets of other statistics and no less than 17 tiny little clouds on it. I won’t repost it here for fear of copyright infringement. But, you can click on the link above to see it. You can also register (FREE) to download a copy of the Cloud Adoption Study for yourself in PDF format.

Issue #4 – How Many Small Businesses Are Out There?

Ladies and gentlemen, this question gets more exaggerated answers than a convention of people telling stories of ‘the big fish that got away’. Regardless, let’s follow this particular vendor-supplied set of numbers. The reason being, we need to know how many SMBs are out there so we can calculate what percentage of the SMBs they polled, right? That way we know if it’s 5 dentists in one room or an overwhelming majority of the dentists worldwide.

“Despite a sluggish global economy, 50 percent of SMBs say cloud computing is going to become more important for their operations, and 58 percent believe working in the cloud can make companies more competitive. There are over 148 million SMB businesses worldwide needing relevant technology solutions, out of which approximately 50% are Small Business organizations.”

Source: Digital WPC article “How you can earn the MPN Small Business Competency”

OK, let’s take 50% of 148 million and say 74 million “Small Business organizations” to be on the safe side.

Issue #5 – What Percentage of the Small Businesses Did You Survey?

Let’s put that 0.00405% number in perspective, shall we? Here are some terms we can wrap our brains around.

Someone hired you to come to Earth to explore it, and out of 24,900 miles around the equator, you could only pick one mile. Even if you sliced that mile into 5,280 little chunks that were 1’x1’ squares and spread them all over the equator, you’d get a lot of plant, animal and sea life, but you’d never be aware of the North or South Pole. Or of Australia, or Detroit, or Paris. The point is, with a sampling that small, you’d be missing a lot of the picture.

Don’t email me. I know, Detroit and Paris aren’t on the equator. The surface area of the Earth (including water) is roughly 198 million square miles x 0.00405% sampling = 8,027 square miles. That’s smaller than the size of Massachusetts (8,262 square miles). Not exactly a typical sample of the Earth, would you agree?

The horse is in really bad shape now.

Let’s come back to the idea of our earlier graph for a moment. How big was the voice of those 3,000 SMBs polled? Look below. 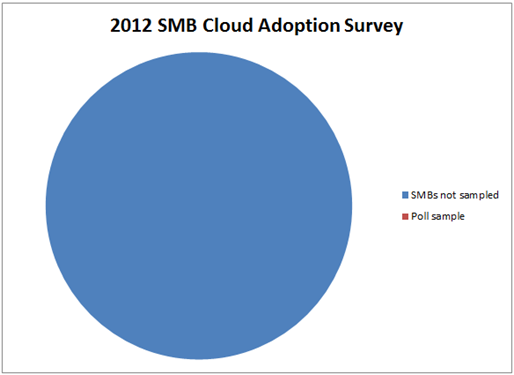 Do you see the Red poll sample slice in the round graph above? No?

Let’s zoom in more with Windows Magnifier in Windows 7… 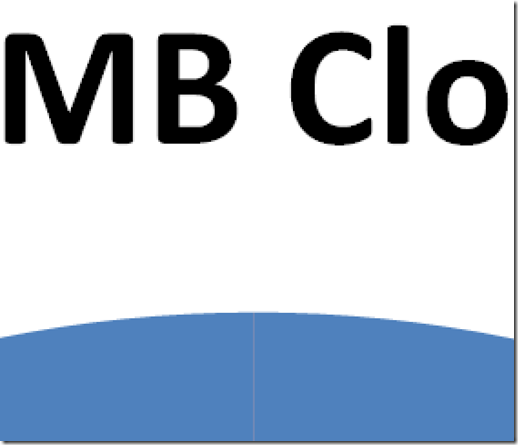 I am picking on THIS:

I mean, if “58% of SMBs say cloud computing will make their companies more competitive” what does that say about the 42%?

Honestly, I love Microsoft products and deeply appreciate the people who make and support them, but I detest the hyperbole in marketing and nonsensical licensing. And constantly having cloud computing shoved down my throat as the Soylent Green of the future is giving me marketing indigestion.

…and just in case anyone has continued reading this far…

Sub-Rant – Why Do I Let This Cloud Hype Get Under My Skin?

To me, all of this hype is reminiscent of the dot com bubble. Like the industrial revolution, the dot com revolution was a good thing. And ‘cloud’ is good too, in moderation, and when it makes good business-sense. Like most of you, I use the Internet and cloud computing in one form or another every day. I like it. It brings awesome stuff into my work and personal life.

However, during the dot com bubble there was so much marketing hype and hysteria that I personally saw offline companies having meetings to decide if they needed to destroy their current business model or reincorporate just to add ‘dot com’ to their company name. It wasn’t curiosity or concern, it was straight-up fear. Fear of missing out on something. They were literally panicking that they were being left behind. Panicking is a bad business model.

Here are some other bad business models for consideration:

In all seriousness, the constant nagging and unfounded hype is damaging. It’s exhausting customers. It’s alienating partners. It’s a game of ‘who can scream cloud the loudest’ and nobody wins. And if you believe the hype, any uptick in sales only garners more funding to crank up the volume on the bullhorn.

SMB is not a value meal size on the IT fast food menu. SMB is a 74-million-piece puzzle, and it doesn’t make one huge pretty picture. You can’t ask four one-thousandths of one percent what the other 99.996% want or need. You have to be at the coal face, and that’s where the partners are – the SMB partners, not the Enterprise guys certing up with Gold SMB exams who think that SMBs are a bunch of yokels who haven’t heard of Office 365 yet. Our job is to help SMB clients make sound business decisions based on facts, budget, bandwidth, market conditions, the individuality of the company, and small business experience – not on panic, not ‘one-size-fits-all-and-everybody-wants-to-pay-monthly-plus-owning-servers-is-stupid’ hype, and certainly not on ill-fitting solutions that are simply lower cost for you to support or higher margins for you to sell. In short, you think you know what you’re doing in SMB, but you’re wrong. We can help.

Please listen to us. The Small Business Specialist Community is viable and valuable. We have everyone’s best interest at heart, and we have no reason to yank your chain or lead you astray. We want everyone to win.

Far too often the conversation is one-sided. And when it’s two-sided, saying “That’s Good Feedback” and then not using it is like someone handing you medicine and you just throw it in the trash or let it expire on the shelf – the feedback is only beneficial if YOU USE IT.

This is not just a marketing problem or a product group interaction problem. This issue comes from the top down. Specifically, at the WPC 2010 in Steve Ballmer’s keynote he was correct when he said:

So if we’re embracing it together, you’re listening to our feedback, right? Not exactly. His very next words were:

He didn’t say ‘be IN the cloud’, he said ‘MOVE to the cloud’. That was two years ago and it still stings to hear a CEO waive off “partner” concerns with the words “blah blah blah blah blah”. I can’t imagine ever saying that to one of my partners or customers. Well, at least not without getting slapped in the face or fired.

How Much More Do We Have To Take?

In summary, the future of SMB product looks sparse and half-hearted. The company shrouds our collective digital futures under extra levels of Non-Disclosure Agreements. Good product improvement ideas get shot down because the concrete has already dried before we even get to see the plans for the foundation. Years of valuable talent have left the teams faster than air escaping a popped balloon. Everything is played close to the vest just so the marketing department can have their big reveal of a beta or customer preview at whatever the next big trade show is. And everyone contorts to twist around gag orders because the almighty “market buzz” makes the shareholders happy. What about what makes the customers happy?

Side-rant: Asking folks already under NDA to sign extra NDAs on top of existing ones is like giving your spouse an updated prenup for an anniversary present. “I love you dear, you know I do, and I trust you. My lawyer just thinks this is in my best interest, ya know? No hard feelings. Love ya!” What does that say about the trust relationship?

I’m not sure how things work up in Cloud City, but in SMB the cloud is a tool to be used judiciously, not the defacto and ultimate destination. Our ‘administrator’ has a name, and it’s not Lando Calrissian. If you honestly believe that the other 99.996% of SMBs are nothing but 2-250 user companies with fat pipes, a distaste for on-premise equipment and a love of perpetual software rental, you’ve already lost.

Or maybe you WANT to lose? Maybe you don’t want to be in the SBS / WHS / WSSe business anymore? Sure, product support is a cost center. Perhaps the goal in SMB is like Ballmer said – you go ‘all-in’ to the cloud. Partners become little more than migrators of their client data up to your servers. Perhaps your new customer model comes with a choice – either fit into a nice tidy little cloud rental box or else “we’re not your folks”? (And just maybe, out of generosity, you’ll throw a whitepaper at them if they insist on ‘doing it the hard way’.) If so, then obviously our customers aren’t your folks either. You’ve got a LOT of people out here who still want to be your partner. They’ve got the SMB experience, the skills, the desire, and the customers to back it up – don’t blow it Microsoft.