If you’ve been wishing for some structured Windows Small Business Server 2008 training offered by Microsoft, wait no more.  Microsoft has announced a set of four hands-on labs for SBS 2008, and (it gets better) it’s free!

The courses available are:

The downloads are available from the Microsoft Connect site:

Here’s a screen shot of the file downloads in the kit: 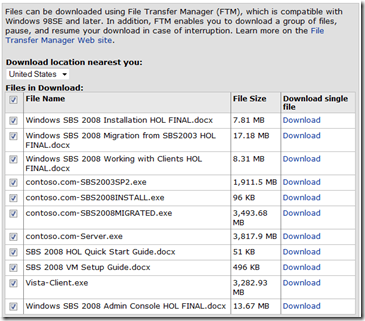 * Note: If you’ve never installed Hyper-V before, I’ve got a short video
(4:18 minutes) on YouTube demonstrating the installation.

** Server-class hardware is recommended, but not required since this is a HOL and not a production box. For example, here are my demo Hyper-V box specs:

To make sure that your machine supports Hyper-V (both in the BIOS and on the processor) check out the SecurAble download from GRC.com that tests hardware virtualization: http://www.grc.com/securable.htm

You’re invited to attend the November 2009 KYSBSUG meeting next week:

While the SBS build progresses we’ll also have another Hyper-V box on hand to show various operating systems, including Windows XP, Vista, Windows 7 & Ubuntu, plus some Hyper-V best practices.

We’re also bringing a copy of Beatrice Mulzer’s new book for you to check out:

Join Susan Bradley and I this week as we combine super-forces to to give the following presentation:

Description:
This presentation will help you understand the features of Windows 7. This version of Windows has many, many cool new features that end users are going to love and geeks will become addicted to. Susan and I share our favorite parts of Windows 7, and I’ll try not to act like a goober and embarrass her. Join us for all the fun!

Another one from the mailbag:

Question – How do I change the timeout in SBS 2008? Users are complaining that Companyweb times out when they get involved in a phone call or when someone walks in their office.

Here’s what each setting does:

Just because a port is open in RRAS or ISA (circa SBS 2003) doesn’t mean that it isn’t being blocked elsewhere, like at the ISP or because port forwarding isn’t setup properly in your firewall. Sometimes you need an outside view of the external ports on your internet connection.

DISCLAIMER – Only open the ports you absolutely MUST have. Example, if you’re not running the POP3 connector or FTP, don’t open those ports! If you’re not sure about a port, check the Port/IP Lookup on Sans.org or ask someone who knows!

To check all of the commonly used SBS ports at once:

This scan will come back with a list of ports you entered and show the status. 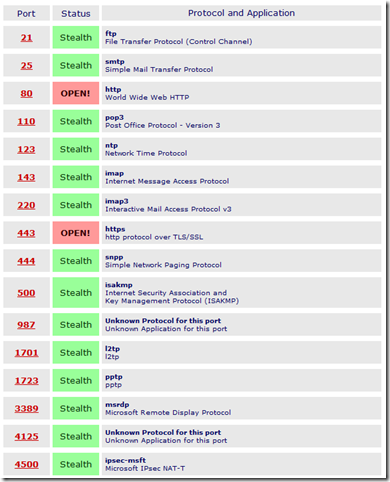 Below is a handy chart that I stole from Susan and Windows IT Pro and updated a couple of times over the years.

**Note: The ports listed above in bold are required by SBS 2008, per Microsoft TechNet article “Managing Windows Small Business Server 2008 Remote Web Workplace”, including port 3389, but see article below.

***Question: Should I open port 3389 for remote administration or remote desktop connections?
Answer from Microsoft: “You no longer need to open port 3389. Windows Small Business Server 2008 uses Terminal Services Gateway to redirect traffic from port 443 to a selected desktop or server for RDP connections. You would need to use RWW or configure the Terminal Services client to use TS Gateway.”
Source: http://technet.microsoft.com/en-us/sbs/cc817589.aspx

I’ll try to keep this form updated as time goes on and will keep a permanent copy at http://www.nogeekleftbehind.com/sbs-ports/. 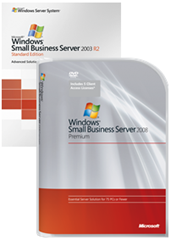 I wanted to bookmark some handy SBS migration resources:

All are welcome, but seating is limited.  Lunch is provided by the meeting sponsor, TEK Systems.

IMPORTANT – You must RSVP to info@loumug.com to reserve your seat.

Hope to see you all there! 🙂

NOTE: This is a limited time offer, so grab it while you can! 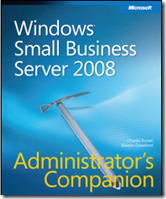 Your comprehensive, one-volume guide to planning, setup, and administration.

Get the critical information you need to build and run a Windows Small Business Server 2008–based network. This essential, single-volume reference details system capabilities and components—including Premium Edition features. Gain the real-world insights, workarounds, and troubleshooting tactics you need for on-the-job results.

“After a migration, some of the users showed up in the SBS Console with a key under their name and some didn’t. Example:

I can’t change RWW access for these users either – it’s grayed out:

What does that key mean and how do I get rid of it?

The key means the users are domain administrators, and therefore you can’t disable RWW for them individually. Don’t be fooled by the “User Role” column.

The key can come from two places.

1 – If a new user is created with the User Role of Network Administrator when running the SBS 2008 Add a new user account wizard, they get that key.

2 – In a migration scenario (like this one) if a user was a member of the “Administrators – domain/Builtin” Security Group on the source server, they will show up with that key after the migration to the SBS 2008 box (see George McFly above):

Before we move onto the resolution (below), there are a few points to remember with User Roles in SBS 2008 detailed below. The wizards make it VERY easy to blow stuff up accidentally.

CAUTION – It is highly recommended that you read understand all of the information in this blog post before making changes any to user accounts and groups. There is no Undo or Recycle Bin for Active Directory changes in SBS 2008 RTM.

When running the “Add a new user account” wizard in SBS 2008, you have
(by default) three options for User Roles: 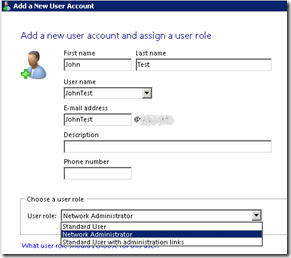 Here’s what you get with each role.

HINT: *The All Users and Windows SBS Administrators groups are E-mail Distribution Groups, not security groups, which means that you can’t assign security permissions to those groups.

Normally you would think that a group named “Windows SBS Administrators” would be some type of security group, but that’s just one of the gotchas in SBS 2008. The Groups tab in the SBS 2008 console makes this easy to see, but if you’re poking around in AD, you might forget. Just look for the ‘key’ icon to differentiate E-Mail and Security Groups.

So, this begs the question, “If I create a standard user, right-click them in the console and make them a member of all of the same groups as the Network Administrator in the chart above, do they get the ‘key’ icon?

Answer: No. You have to use Change user role for user accounts wizard (or dig into AD).

Things to remember about User Roles and user accounts in SBS 2008:

OK, you understand the difference between Add & Replace, and the implications of re-applying a user role to an individual.

After you make a copy of the user group membership settings (because you love your job) you need to apply the “Standard User” User Role to that user and choose “Replace user permissions or settings” to get rid of that domain admin key.

If you’re AD savvy you can always open Active Directory Users and Computers and remove membership the ‘Administrators – domain/Builtin’ Security Group. This just takes away the ‘Administrator’ permissions and leaves everything else in tact.

Props: Thanks to Cory Rammer, MCSA/MCSE and all-around nice guy for his help on this post!

This week, Thursday March 19, 2009 marks the 5-Year Anniversary of the Kentucky Small Business Server User Group (KYSBSUG). Where did the time go?

It’s pretty amazing to look back at all the events and topics we’ve covered in the last 60+ months. Some of the highlights we’ve met on include:

Over the years we’ve had numerous well-known speakers, including: Amy Luby, Ronald Grattopp (Microsoft), Brian Von Axleson (Microsoft), Chris Rue [MVP], Kevin Royalty [MVP], Allen Miller, and many more. We’ve had study groups, round table meetings, and Live Meetings with visitors from all around the USA, Canada, and even as far away as Belgium.

In short, we’ve really done a lot in the last 5 years, and we’d like to invite you to celebrate with us! There will be food, door prizes, and lots of networking opportunities. Please register today!

IMPORTANT: This venue was chosen because it’s only a few blocks away from the Microsoft events that are happening earlier that day (which you should also attend):